Reunification of Asia: The story of the Baku-Tbilisi-Kars railway construction 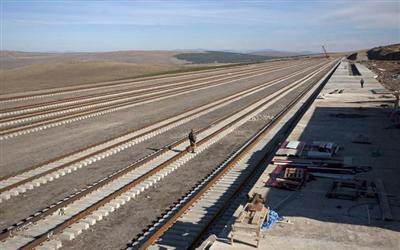 The countries in the South Caucasus have combined their efforts to take advantage of their geographical position. Countries in this region want to play a role as a bridge again, as in the ancient Silk Road. The South Caucasus can integrate the emerging markets of East Asia and Europe. The new Baku-Tbilisi-Kars railroad will be the central nervous system of the restored trade corridor. The cargo can easily be transported through this railroad to another part of Eurasia, within 15 days, bypassing Russia and its embargo. The 826-kilometer-long BTQ railway will extend from the Caspian Sea to the Georgian capital, Tbilisi. From there, it will be directed towards the south, passing through the eastern part of Turkey and joining the railroad system of this country and entering the European border. This railroad will become an important part of the southern direction of the new Silk Road Network, which connects Europe and China with the function of a commercial transport corridor.

Since the Turkish occupation of the border between Garsus and the Armenian town of Kars due to the Nagorno-Karabakh conflict, the idea of ​​constructing a BTK railroad in Ankara occurred in 1993. But the implementation of this project was delayed for a long time. And only in 2007, the leaders of Azerbaijan, Georgia and Turkey met in Tbilisi to sign a railroad construction agreement. Now, this project will connect not only these three countries, but also East and West.

The South Caucasus region is located in the center of different active markets. These markets run along the South Caucasus. Central Asia and China to the east, Turkey and Europe to the west, Russia to the north, and Middle East to the south. The IUCN physically joins the central part of Eurasia. 70% of the world's population, 75% of energy resources, 70% of the gross domestic product fall into the share of Eurasia from east to China, from west to Europe.

The duration of the trip between China and Europe, passing through the BTQ railroad, is 15 days. It costs twice as fast as shipping, and twice as low as air shipping. The trains can be shipped from the ports of Khorgos Gateway of Kazakhstan and delivered to the ferries and delivered to the port of New Baku via the Caspian Sea. From here, the loads can be easily downloaded to the trains and sent to Europe via BTQ. Products can be transported in the opposite direction.

At present transavia cargo transportation by rail is on the rise. Manufacturers, forwarders and buyers are well aware of the advantages of the railroad. In addition, the service level in this area is rising, and the network is expanding through new routes and logistics centers. Therefore, businessmen support this network.

As a rule, expensive freight is transported through the railway. It includes electrical goods, cars, B2B machines, agricultural products, meat, wine and fashionable goods. These products should be delivered as soon as possible.

One of the biggest reasons for establishing a southern part of the road between China and Europe was Russia's food embargo. The Crimea and the situation in Ukraine in March 2014 after the US and European Union imposed sanctions on Russia, Moscow was not content with the ban on the entry of two advisers to John Boner, John McCain and Obama. He has also stopped importing and transitting food from EU countries that support the sanctions. Thus, it is not allowed to export French cheese, Dutch vegan or Polish apples from Russia.

The point is that the EU may send its products forbidden by Russia to China through railways through the New Silk Road. In other words, there is a need for a southern railway, which crosses Russia and connects Europe and Asia so far. BTQ railroad will fill this gap.

The new Transcaucasian transport corridor is expanding. The BTK railroad runs through its masterpiece. New production centers are created in the Transcaucasian transport corridor because of the new logistic capabilities of the region, production capacity is increasing. New Baku port with 20 square kilometers is covered by a free trade zone. This zone will also be used to supply the country with petrochemical products. At the same time, it includes plastic and other manufacturing products. In turn, Georgia has free trade zones throughout the country, and several industrial centers have been set up in Turkey in the new logistics center - near Kars.

"It is always necessary to diversify the economy. But we can not only hope for China's exports. So, as China rises as the country rises, and China's economy weakens, the country can weaken, "said Mahir Humbatov, an Azerbaijani researcher, author of two books on the BTK railway.

BTK railroad will also stimulate domestic production. In addition, transit across the railways